This story appeared in the Penrith Press newspaper on 8 September 2016. 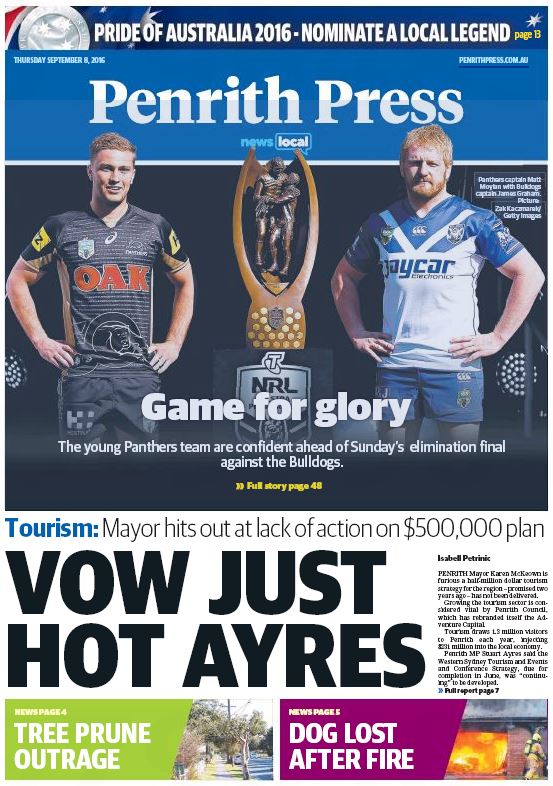 PENRITH mayor Karen McKeown has attacked the State Government for dealing a devastating blow to tourism in western Sydney, by shelving a promised $500,000 regional strategy.

“It is very disappointing for our region, especially given (Penrith) Council is doing everything it can to attract big events to Penrith,” Ms McKeown told the Penrith Press.

Her comments come as the Minister for Trade, Tourism and Major Events, Stuart Ayres confirmed to a Budget Estimates Committee last week that the $500,000 Western Sydney Tourism and Events and Conference Strategy — promised by his government two years ago — had not yet been completed.

“We have not developed a formal strategy document for western Sydney tourism,” Mr Ayres, who is also the Penrith MP, told the Budget Estimates inquiry.

The NSW Liberal Government committed in June 2014 to develop the strategy, in partnership with industry, over two yeas.

Mr Ayres told the inquiry a “series of pieces of work, particularly relating to destination networks that include the Hawkesbury, Penrith and Blue Mountains’’ had been undertaken.

“I have also worked closely with the Deloitte Shaping Future Citiesprogram, which identified tourism as an important driver for western Sydney,” he said.

In 2014/15, the total tourism and hospitality sales in Penrith City was $324.7 million, National Institute of Economic and Industry Research figures show.

Penrith Council is pushing the region as the “adventure capital” and aims to double annual visitor numbers over the next decade.

Ms McKeown said the council was grateful to Destination NSW, as the NSW Government’s tourism and major events agency, “for bringing ballet (to Penrith) in November’’.

That program is expected to inject $1.3 million into the local visitor economy during the next three years.

“But if we had a (tourism) strategy in place, it would certainly have helped us plan for bigger and better events into the future,” Ms McKeown said.

“I was very disappointed … Stuart Ayres, as the minister for tourism, actually said during the Budget Estimates (inquiry) that they would be shelving the $500,000 Western Sydney Tourism and Events and Conference Strategy.”

He said the NSW Government would invest $43 million over the next four years to attract visitors to NSW through six new destination networks “with Penrith, the Hawkesbury and Blue Mountains included for the first time” under network ‘Sydney Surrounds North’.

When pressed by Shadow Minister for Trade, Tourism and Major Events, Penny Sharpe at the public Budget Estimates hearing to reveal how much had been spent so far on the strategy, Mr Ayres said: “I take that on notice.”

He also didn’t tell the Penrith Press how much he had spent.

Penrith now has a destination management plan, praised by the state’s tourism body Destination NSW; a tourism website; and is heavily promoted as an “adventure capital”.

This year, the council gave $3000 to help form the Western Sydney Opera company, and filming for reality drama Cannonball was held in Penrith.

Penrith Council’s ‘Music by the River’ program along the Nepean River has proven popular in Summer, and Mayor Karen McKeown said she expects her council’s free Penrith River Festival, on November 4-5, to be another major tourist drawcard for Penrith City this year.

Lack of communication and collaboration in the tourism industry and between local government areas, and “market fragmentation and a lack of critical mass of events or tourist attractions” (with the exception of the Blue Mountains) were also identified as impediments to growing visitor expenditure in the region.

■ In 2012, the NSW Government called on every region across the state to double its overnight visitor expenditure to $36.6 billion by 2020

■ Also for 2014/15 there were 422,957 international visitors nights in Penrith City, accounting for 20 per cent of the total visitor nights

NSW Labor says: "Yes, but what about the musical Hamilton?"