As Queensland begins an advertising campaign alerting families to its July 1 ban on single-use plastic bags, the NSW Labor Opposition has stepped up its calls on the Berejiklian Government to follow suit here.

And if the Berejiklian Government fails to legislate, a Foley Labor Government will ban them in 2019, if elected.

South Australia (2009), the ACT (2011), the Northern Territory (2011) and Tasmania (2013) all have bans in place. Queensland, Western Australia and Victoria have all indicated that they will act this year.

NSW is the only Australian jurisdiction refusing to move to ban the single use plastic bag.

In addition, Woolworths, Coles and Harris Farm Markets have agreed to a voluntary ban on plastic bags.

Shadow Environment Minister Penny Sharpe and Shadow Minister for the North Coast Walt Secord made the pledge as the Queensland Government – in conjunction with Queensland retailers - begins an education campaign explaining the changes to the community. 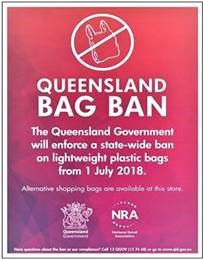 In 2016, Ms Sharpe introduced legislation – Plastic Shopping Bags (Prohibition on Supply by Retailers) Bill – into the NSW Parliament to ban single use plastic bags in NSW. The Sharpe Bill was defeated on October 19, 2017 by the NSW Liberals and Nationals – 20 to 17. At the time, Mr Secord spoke in favour of the ban.

In South Australia, it is estimated that 400 million fewer plastic bags are used each year since the ban began, while there was a 36 per cent reduction in bags going to landfill in the ACT.

“I call on the Premier Gladys Berejiklian and Environment Minister Gabrielle Upton to join the community on this important environmental reform.

“Plastic bags kill thousands of turtles, dolphins, fish, and birds each year. A ban can help stop the carnage.

“NSW should have been leading the nation in banning single-use plastic bags, but instead the Premier is dragging her feet on this important environmental reform.”

“The community – especially the North Coast – has spoken and they are ready for action on single use plastic bags. They want a State-ban, but they are puzzled by the priorities of the Berejiklian Government.

“The whole country – in fact, large sections of the developed world – are moving to ban single use plastic bags, but still the Liberals and Nationals are moving in another direction.

“The Premier will spend $2.7 billion on stadiums but they refuse to act on single-use plastic bags.”