The Berejiklian Government is failing to deliver its only environmental target – reducing litter.

This is the only environmental target that the Berejiklian Government has committed to yet they are failing to meet it.

The graph below shows litter volume growing in NSW, while the average across Australia is continues to decrease: 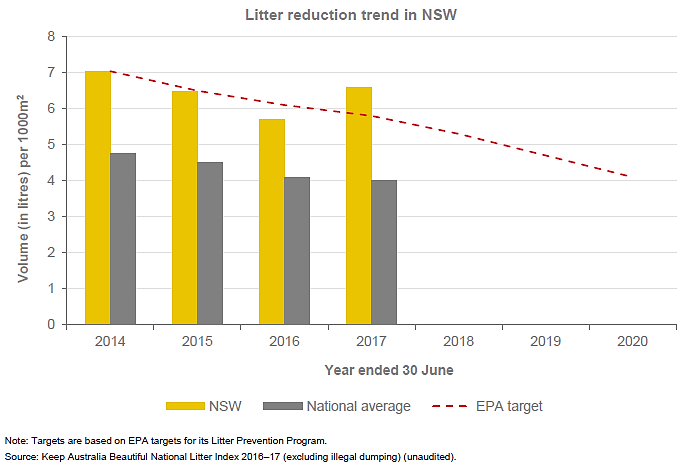 The findings are another in a string of failures for Environment Minister Gabrielle Upton including the botched roll out of the container deposit scheme and failing to fix the issue of thousands of rubbish trucks going to Queensland landfills to avoid paying the NSW waste levy. This is costing NSW $100 million per year.

When it comes to litter reduction there are two things the NSW Government could do. The first is banning single use plastic bags. NSW remains the only state or territory that is failing to take this easy step towards litter reduction.

“Minister Upton only has one target set by the Premier to meet – and that is to reduce litter across NSW.  With a 16 per cent increase in litter this year the Minister gets an ‘F’ for her efforts.

“Whether it is the intransigence on banning single use plastic bags or the continued debacle of the roll out of the container deposit scheme, the Minister for the Environment is incapable of delivering any positive environmental outcomes for NSW.

“Our beaches, waterways and parks are choking with litter. NSW cannot afford this failure to continue.”