"We who engage in non-violent direct action are not the creators of tension. We merely bring to the surface the hidden tension that is already alive."

They are not my words; they are the words of Martin Luther King, a very wise man who knew a thing or two about hidden and not so hidden tension. There is tension across New South Wales when it comes to the choices we are making about our future. In our democratic society, that is as it should be and always will be. We live in a free society where the right to peaceful protest is part of our democratic contract and what it is to be a citizen; it is part of our right to object, to stand up for the things we believe in, and to have a different view from government. It is fundamental to who we are and who we should be.

The Inclosed Lands, Crimes and Law Enforcement Legislation Amendment (Interference) Bill 2016 is an assault on peaceful protest and on the right of citizens to have a different view to the majority about the future of our land and water. 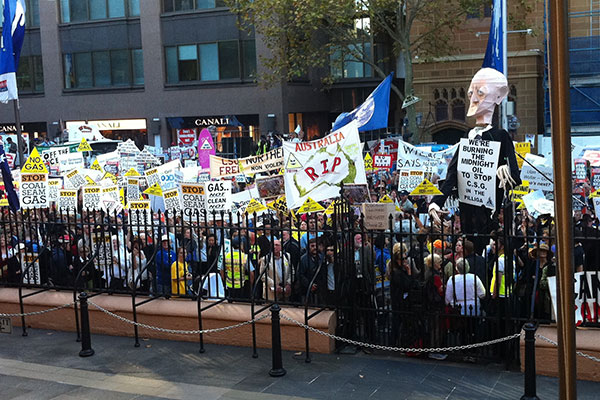 This bill gives unheard-of powers to break up peaceful protests, to gaol protestors for seven years, to fine peaceful protestors and to search and destroy private property on the hunch that it may be used in a protest. It is a gross overreach by a government that is out of touch with the community. Today, out the front of Parliament House standing in the pouring rain were environmentalists, unionists, Indigenous people, farmers and community organisations—people who know that protest sometimes is the only way to stop government overreach and to get real progress that delivers outcomes for the public good over private greed.

Saving the rainforests of northern New South Wales, creating new national parks, pushing back on coal seam gas across New South Wales, winning equal pay, getting real action on climate change and fair pay for a fair day's work have all been won through campaigning that has involved peaceful protest.

In this State at the moment communities are fighting for better air quality, for the right to keep their local councils, to stop mining encroaching on agricultural land, to save koalas from extinction, to protect endangered ecological communities, to stop overdevelopment, to protect old growth forests, to save our rivers, to stop pollution in our harbour, to protect our marine environment and to protect our precious water across the State. My union movement colleagues are fighting for penalty rates, to save Medicare, for better funding for our schools, for proper funding of TAFE, and for better health care in our hospitals and nursing homes. This involves protest.

I thank the Law Society for belling the cat on this bill by stating that the bill:

Removes protections from political activities that have properly been regarded as an essential part of the social, political and cultural life of any civilised society.

The Law Society also states that the bill:

... appears to encroach upon and limit fundamental rights to assemble and protest and would represent an erosion of long-standing democratic institutions and individual rights

As members of the New South Wales upper House—the New South Wales House of review—we should not be waving through laws that the government of the day seeks to push forward to punish those involved in that pesky little thing called democratic debate through protest.

Labor opposes the bill, as should The Nationals, whose members have meekly sat through this entire debate without a word. A Liberal Party Parliamentary Secretary is sitting at the table and we do not hear a word from The Nationals. When will The Nationals grow a backbone and oppose this bill?

Speech in favour of a moratorium on CSG