There is a better way for NSW.

Labor understands that our urban and natural environment is not the enemy of, but a pre-condition for, a prosperous economy.

Labor knows that our schools, our preschools, our technical and further education colleges and our hospitals are the very foundation of a decent life for all of our State's citizens.

Labor is focused on the future, focused on a sustainable economy delivering opportunities for all.”

So… what was in the NSW Budget?

Labor revealed the real story behind the NSW Budget.

Premier Mike Baird and Treasurer Gladys Berejiklian turned Grinch by hoarding away over $8 billion in surplus taxes over the next four years, ignoring a raft of health, education and housing affordability priorities. 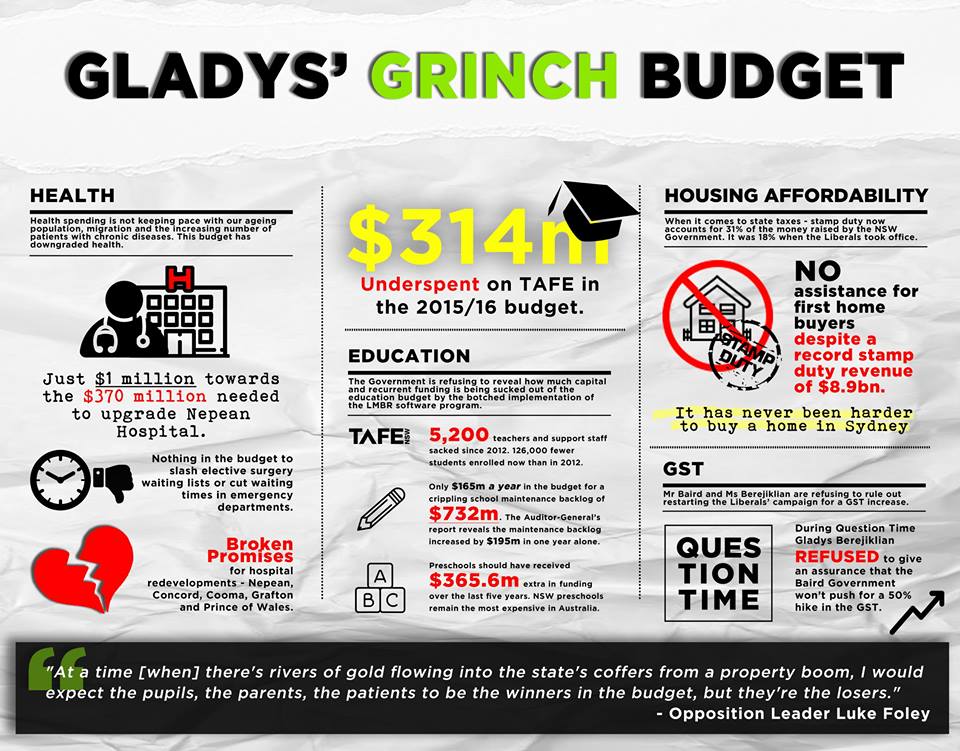 In vocational education, the Budget showed again how the Baird Government is hell-bent on destroying TAFE and its powerful role as the public vocational education provider. Yearly enrolments are down by 126,000; there are 14,567 fewer students with disabilities enrolled; and 5,200 teachers and support staff have been sacked. 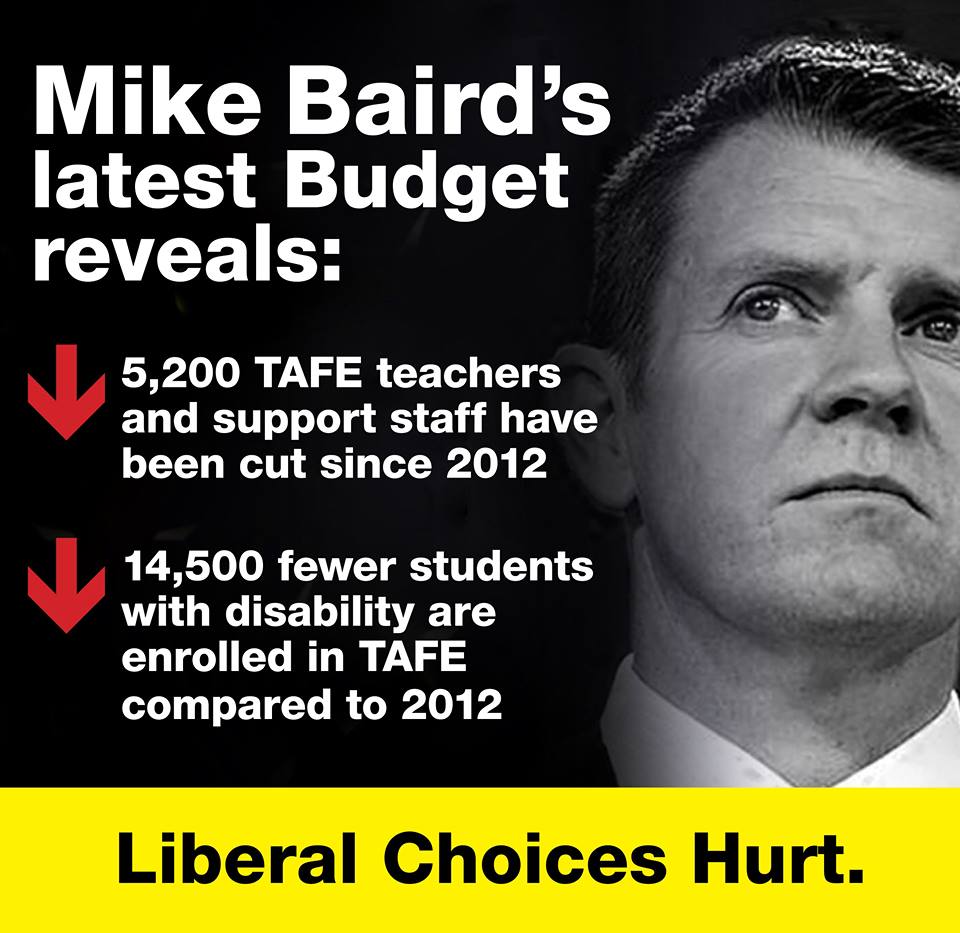 Opposition Leader Luke Foley spoke out in his Budget reply speech to describe the Baird Government’s stunning arrogance when it comes to ignoring the community in their planning and decision-making.

One example of their tin ear was hidden in the Budget Papers on CSG, where the Baird Government confirmed plans to continue to develop CSG in this State ahead of implementation of the recommendations made by the NSW Chief Scientist in her September 2014 report. 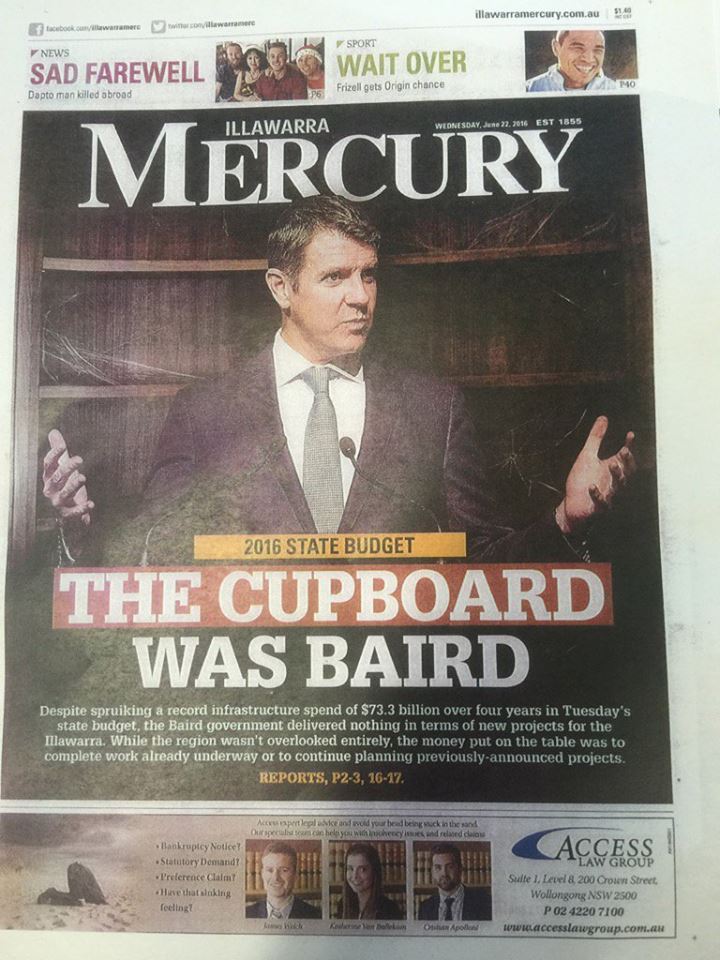 Isn't it great when newspapers bring out the big puns?

The plan will build new and upgraded schools, promote language studies, improve preschool affordability and access and stop the Liberal-National assault on the TAFE system. 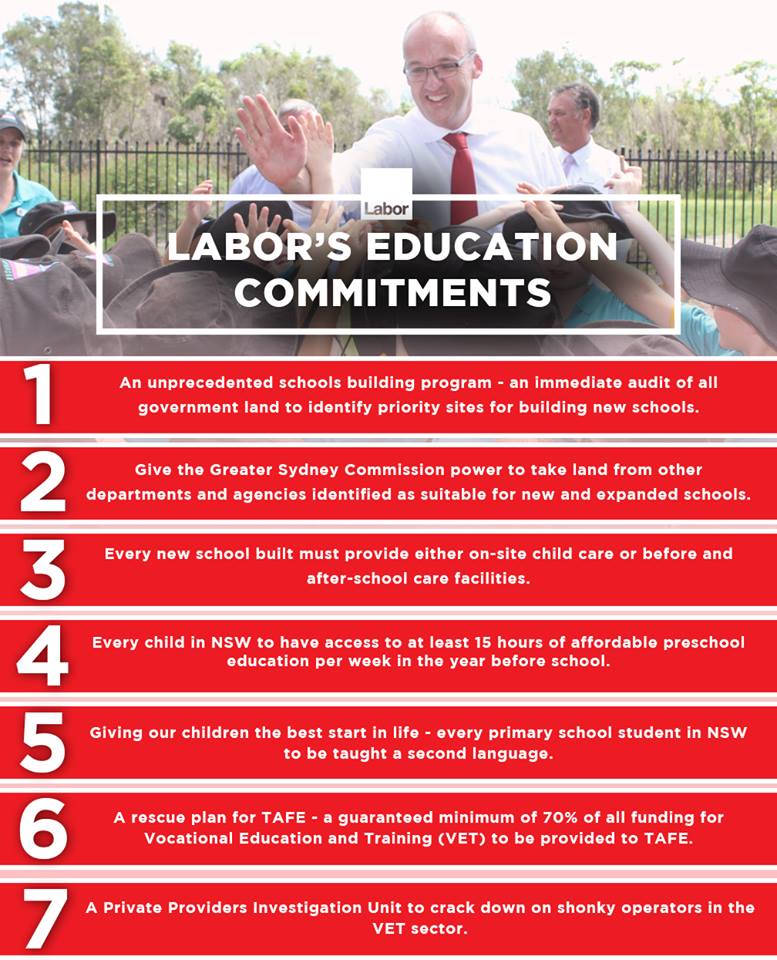 Luke also announced that a future Labor Government would slash airport train fares and cut congestion around Sydney Airport, in effect slashing the access fee for passengers to $5, and scrapping it all together for airport workers.

In addition, NSW Labor unveiled a plan to make the Hunter region a national hub for the clean technology industry, including the development of driverless electric cars in order to transform the state’s road network for better traffic efficiency and safety.

Finally, Labor pledged to restore integrity and transparency to NSW politics. A future Labor Government will reverse Mike Baird’s cuts to the ICAC, boost support for the NSW Electoral Commission so that political donations are properly policed, and establish a permanent Parliamentary Budget Office.

One of the best parts of this announcement - for activists? Labor would also move to recognise modern community activism by allowing E-petitions to be submitted to the NSW Parliament, alongside paper petitions.

This budget saw more cuts to the National Parks and Wildlife Service that will put pressure on staff in areas like fire fighting and hazard reduction.

It will continue the acceleration of commercial activities to replace money lost through cuts.

The biggest hole in the budget is the consistent underspends in the Environmental Trust Budget. The Trust provides the bulk of environmental grants across NSW. See more at http://www.environment.nsw.gov.au/grants/envtrust.htm

Every year this is underspent. Labor has calculated from budget papers for each year that the underspend over the life of this government has been $133 million. For 15/16 alone the underspend is $39 million.dget. The Trust provides the bulk of environmental grants across NSW (see more at http://www.environment.nsw.gov.au/grants/envtrust.htm).