Almost one in five participants in the Berejiklian Government’s botched container deposit scheme have withdrawn or are in the process of doing so, according to a survey conducted by NSW Labor.

On top of this 9 per cent are not operating yet and a further 5 per cent aren’t even aware that they were a designated collection point for cans and bottles, according to the results of a survey of 139 scheme participants Labor spoke to over 6 and 7 December.

Labor’s survey covered 62 per cent of Return & Earn’s 225 over-the-counter collection points – mostly corner shops, small businesses and cafes - listed around NSW. The remainder could not be reached either because there was no phone number listed for the business or the number was disconnected. 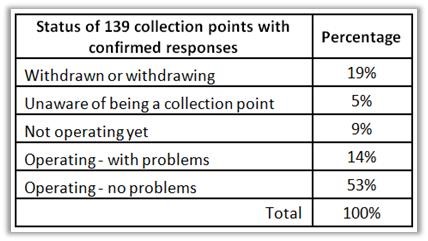 The 20 businesses that are operating and are experiencing problems reported the following issues:

The scheme, which Labor supports, has been a debacle from its launch on December 1 because of Environment Minister Gabrielle Upton’s mishandling.

More than a week into the launch and only 52 reverse vending machines have been installed – a far cry from the promise of 800 machines across 500 collection points the Government said they would deliver.

Businesses have been forced to pay tens of thousands of dollars in upfront payments to participate in the scheme and the few reverse vending machines in operation are not being emptied regularly, resulting in large volumes of litter building up on site.

“The rollout of the container deposit scheme has been a complete shambles.

“There were meant to be 800 reverse vending machines in place but there are still only 52 listed, so the Government has turned to newsagents, car washes and kebab shops as its fallback – but clearly it isn’t working.

“If we are serious about litter reduction, we need a functional container deposit scheme – but the Environment Minister has botched it.”